The wicket has sparked friction across the international game — but one image shows even legends of the sport have been caught up in the wrong debate.

Spinner Ashwin took the bails off at the non-striker's end while England batsman Jos Buttler was backing up, with the controversial move overshadowing his side's 14-run victory over Rajasthan — and the IPL return of Aussie Steve Smith.

The term "Mankad" — used when a bowler runs out a non-striker before delivery — was coined 70 years ago when Indian allrounder Vinoo Mankad twice ran out Bill Brown at the bowler's end during India's tour of Australia in 1947.

It is considered to be against cricket's spirit of fair play and Buttler, who scored 69 off 43 deliveries, walked dejectedly back to the pavilion after an argument with the India bowler.

While legends, including Shane Warne and England captain Michael Vaughan, have declared publicly they are affronted by Ashwin's failure to act within the so-called "spirit of the game" — the emotion has simply clouded the issue.

The only debate that matters is whether Rajasthan Royals star English batsman Jos Buttler was guilty of leaving his crease at the non-striker's end in violation of the MCC Laws of Cricket Code.

One image that has been circulated around the cricket world suggests Ashwin doesn't have a leg to stand on in regards to the laws that govern the so-called Mankad.

The freeze frame shows that on simple rules alone — completely independent of those screaming for blood over Ashwin's poor form — Buttler should never have been given out when the decision was sent up to the third umpire.

The photograph below captures the moment Ashwin's front foot has landed after launching into his release action. It shows Buttler clearly has his bat behind the crease at the exact point of release.

In accordance with MCC Law 41.16 — which governs the non-striker leaving his or her ground early — Buttler should never have been given out as he is allowed to leave his crease "when the bowler would normally have been expected to release the ball".

"If the non-striker is out of his/her ground from the moment the ball comes into play to the instant when the bowler would normally have been expected to release the ball, the bowler is permitted to attempt to run him/her out," the law states.

"Whether the attempt is successful or not, the ball shall not count as one in the over.

"If the bowler fails in an attempt to run out the non-striker, the umpire shall call and signal dead ball as soon as possible." 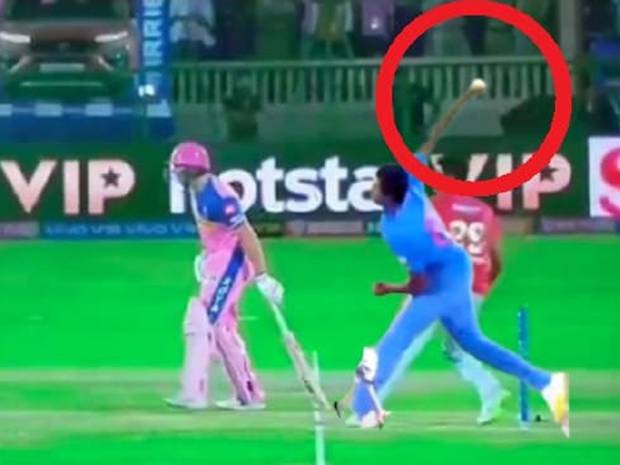 The photo has superimposed an old image of Ashwin bowling for India in blue over the top of him bowling for Kings XI Punjab in red. It's designed to show that when Ashwin's front foot landed last night, he would normally be in his delivery stride preparing to let go of the ball.

Buttler is still in his crease at that point and because he would reasonably expect Ashwin to have delivered the ball, under the laws of the game, he should be safe. However, Ashwin didn't let go of the ball as expected and baulked after planting his front foot, sparking the controversy.

Cricket identities have used the image to nail Ashwin.

Unfortunately, the ambiguity of the rule and bizarre bowling action of Ashwin have further clouded the issue.

The video of the action shows that Ashwin never raised his front arm while launching into his delivery.

International cricket legends, led spiritedly by Aussie great Dean Jones, have declared the image above is made redundant because Ashwin was never truly in the act of bowling — as suggested by his left arm never pointing down the pitch.

Ashwin did launch into the air, but critics are claiming Buttler was correctly given out because Ashwin pulled out of his delivery as Buttler was in the motion of following his routine of leaving his crease without keeping his eye on what the bowler was actually doing.

Speaking at the post-match press conference, Ashwin said his Mankad was simply instinctive and stressed he did not pre-meditate the dismissal, despite Buttler looming as the danger man that had Ashwin's Punjab side on the ropes early in the run chase.

"I don't understand the point of sporting or sportive in that point because it's rules. What applies for one man does not apply for everyone else. Neither was Jos Buttler playing there nor was I played so it's very pertinent to just not compare two people."

Jones and Aussie fast-bowling great Jason Gillespie appeared to suggest Buttler was out because he negligently left his crease.

It was the second time he has been dismissed via the controversial Mankad — he was also run out in a similar fashion after two warnings by Sachithra Senanayake while playing against Sri Lanka in 2014.

Most cricket legends, however, were simply incensed at Ashwin's decision to go against the spirit of the game.

Aussie legend Warne led the public calls for the BCCI — Indian cricket's governing body — to make a public stand against the dismissal and to suspend Ashwin.

"If @josbuttler had been warned well that's fine... if he hasn't and it's the first time I think @ashwinravi99 is completely out of order... watch how often this happens from now on," he wrote on Twitter.

Buttler's Rajasthan teammate Jofra Archer, who will soon qualify to play for England, also took to Twitter to express his anger.

Archer wrote of Ashwin: "You show no confidence in yourself or your bowlers to get the job done so you resort to that ? #greatcaptaincy".

For the record, Rajasthan lost seven wickets for 16 runs at a crucial moment in the chase to fall 14 runs short of Punjab's total of 185.

Buttler looked to be cruising towards a successful run chase with 69 runs from 43 balls — but that's when Ashwin's dismissal turned the game, and the cricketing world, on its head.