Netball and the White Ferns are the big winners in the latest High Performance Sport New Zealand investment announcement.

HPSNZ have confirmed a $36.8 million core investment programme for 2020 with no changes made to the funding for tier 1, 2 and 3 sports involved in the Tokyo Olympics and Paralympics.

"This approach is designed to give Olympic and Paralympic sports more certainty on which to base their transition from the Tokyo to Paris Olympic cycles and their preparations through the Paris cycle," says HPSNZ Chief Executive Michael Scott said.

Netball is the only sport with a significant boost while the women's cricket team will receive the biggest per-year increase.

Netball's funding has increased from $1.50 million to $1.88 million per annum for each of the next four years in preparation for the 2022 Commonwealth Games and 2023 World Cup.

In another boost for women's sport, cricket's investment of $500,000 per year shifts from the Black Caps to the White Ferns for the next two years to support preparation for the 2021 ICC Cricket World Cup, to be hosted in New Zealand, and the 2022 Commonwealth Games, which will feature women's T20 cricket.

Scott says HPSNZ's investment decisions are based on the same four criteria for all sports: past performance; future potential; quality of the high performance programme and campaigns; and the individual sport context.

Following the Tokyo Olympic and Paralympic Games, all sports will be assessed based on Tokyo performance, with final investment decisions to be announced in December 2020. This will include any remaining investment for tier 1 and tier 2 sports, along with investments in other sports and campaigns. 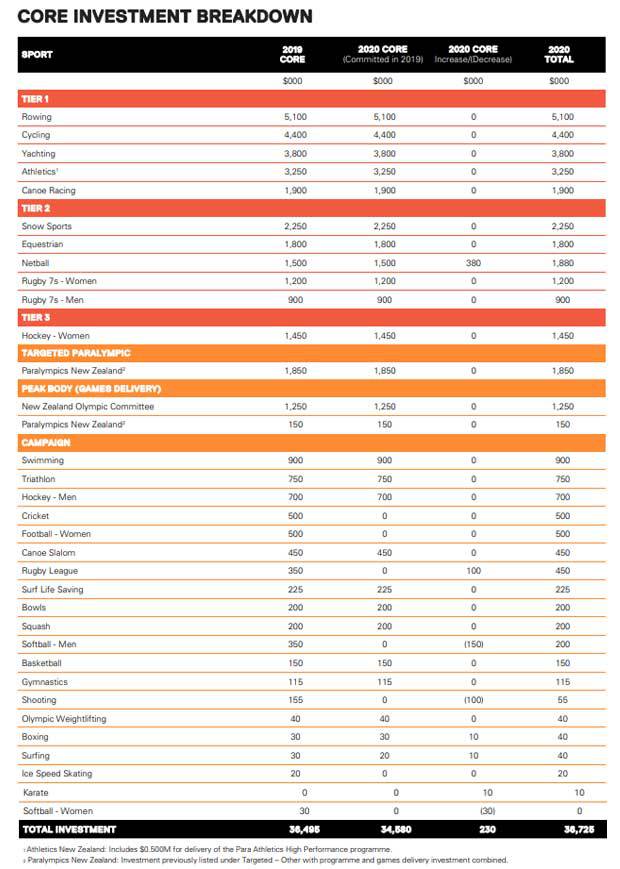