After 32 years away, New Zealand's return to the Melbourne Cricket Ground started with a bang, but ended with a familiar feeling.

After one over, the estimated 20,000 New Zealand fans were in full voice, with Trent Boult having produced a dream start with a wicket in the first over. He received a standing ovation, pro-Black Caps chants were echoing around the ground, and the extended wait to play in the Boxing Day test had been worth every minute.

But by the time 90 overs had been bowled, there was an ominous tone to proceedings. Steve Smith was unbroken and looking dangerous, the Black Caps had received little luck, and Australia were sitting at 257-4 – a similar position to what eventually turned into a first-test mauling in Perth.

There will be no ambush under lights in Melbourne like there was in the pink-ball test, but it was hard to deny a sense of an early opportunity missed, especially considering it had taken just four balls for the Black Caps to make their mark. Boult – also making a notable return after missing the Perth test due to injury – produced a special delivery, with an inswinging yorker cleaning up Joe Burns' middle stump, and sending the opener back to the pavilion for a golden duck. Early wickets were a necessity after Kane Williamson opted to bowl first on a grassy wicket with favourable overhead conditions for swing. They were the best conditions bowlers will likely receive over the first few days, and the Black Caps were desperately unlucky not to make further inroads.

On another day, three or four wickets would have fallen before lunch, but it ultimately required a stunning catch from Southee to ensure that the Black Caps would strike again before the break, flying to his right to reel in a one-handed screamer and remove Warner for 41. 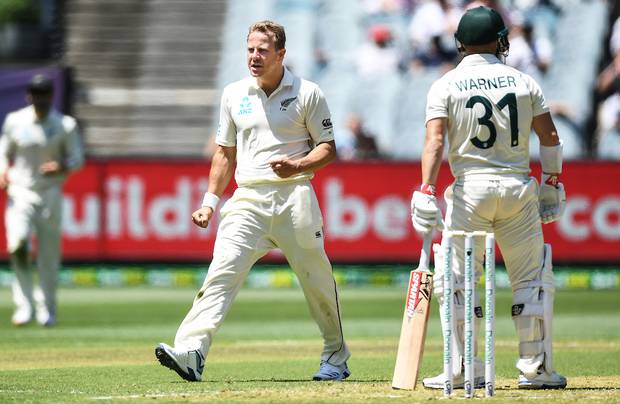 Smith strolled to the crease and was welcomed by a swarm of boos from the Kiwis in the crowd, as well as a stern early short-ball examination from Neil Wagner. The Australian talisman, who has tallied the second-most test runs in 2019, linked up with the most prolific five-day batsman - Marnus Labuschagne – as the pair frustrated the Black Caps.

That frustration came in two forms – the runs being added, and the chances being missed. Much like the first day in Perth, the Black Caps bowlers were diligent, making Australia work for their runs, largely sticking to solid plans, but just lacked the rub of the green.

Labuschagne was streaky in his 63, offering several chances and also nearly being run out twice, but Smith was sounder as the pair added 83 for the third wicket. Labuschagne's grind was ended by Colin de Grandhomme, bizarrely bowled off his elbow, and he was replaced by an even more fortuitous batsman in Matthew Wade.

Wade flayed six edges, and missed another handful, but his runs were valuable as he added 38 and provided support for Smith, who did offer a few edges, but did so with soft enough hands that they fell short of despairing fielders.

When Wade's luck ran out – de Grandhomme claiming a second wicket, caught behind – Smith was joined by Travis Head, just as the second new ball loomed.

It was another glorious opportunity for the Black Caps to claim the ascendancy, but they couldn't quite grasp it. This time, they couldn't rue bad luck, with Smith getting better with every ball, and creaming some stunning straight drives to reach 77 by stumps.

Head hung around to be with him on 25, and for all of the Black Caps' spirit and toil on an iconic day for New Zealand cricket, it was, once again, Australia's day.