The race to replace Steve Hansen as All Blacks head coach has lost a major contender.

Jamie Joseph has re-signed as head coach of Japan, inking a deal to stay with the Brave Blossoms until the end of 2023.

The Japanese rugby union announced the news yesterday, leaving the All Blacks coaching race shaping up as a showdown between Crusaders coach Scott Robertson and Hansen's assistant, Ian Foster.

New Zealand Rugby released a statement this morning saying it would like to congratulate Joseph on his decision.

"We congratulate and wish Jamie well as he continues his work coaching the Brave Blossoms. We respect his decision and his abilities as a coach," NZR chairman Brent Impey said.

"The All Blacks Head Coach selection panel will continue their shortlisting process, with interviews and negotiations to be conducted through November and early December. We are looking forward to announcing the next Head Coach of the All Blacks next month."

Joseph led Japan to their first Rugby World Cup quarter-final a month ago, after topping their pool with famous victories over Ireland and Scotland. That run to the last eight also saw Japan temporarily reach an all-time high of sixth on the world rankings.

"I have great expectations for rugby in Japan and I'm very honoured that I can lead the team towards the next World Cup," Joseph said in a statement.

"We achieved the goal of being among the top eight countries in the World Cup but there are still more issues to be tackled. To that end, I chose the path to challenge with the Japanese national team again. I want to strengthen the team.

"I have a great sense of expectation in Japanese rugby and I am very pleased to be able to lead the team for the next Rugby World Cup."

The former Highlanders coach was seen as one of the favourites for the All Blacks job, being one of 26 coaches invited to apply for the gig. His resume seemingly strengthened when his highly sought-after assistant with Japan, Tony Brown, turned down approaches from both Foster and Robertson to join their respective coaching teams, in order to stick with Joseph. 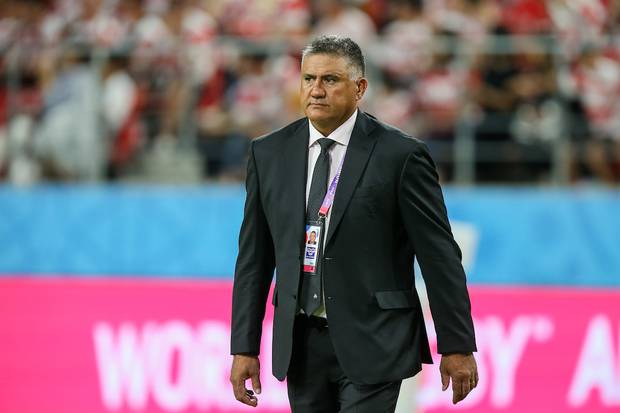 "It just didn't feel right to be the guy who's floating around between three different coaches to potentially get the job. It felt right to stick with Jamie and what we've been doing for the last eight years," he told The Breakdown.

Robertson admitted the news was a blow as he tries to assemble a coaching staff capable of earning the top job.

"We had planned for a while to work together. He showed his hand to work with Jamie - and his loyalty. I appreciate it was a tough call for him to make to me."

Now, Brown will be sticking with Japan, while Joseph's decision seemingly leaves Foster and Robertson as the two contenders left standing.

It had been widely accepted that former Chiefs coach Dave Rennie was also a strong favourite, but leading rugby broadcaster Scotty Stevenson indicated earlier this week that he was out of the race, with the former Chiefs coach tipped as the favourite to take over the vacant Wallabies job.

New Zealand Rugby is expected to make its decision on the next All Blacks coach before Christmas.