Officials are set to re-open an investigation into Supercars driver Fabian Coulthard's "disgraceful" actions during a late safety car period at the Bathurst 1000.

It is believed stewards will take a second look at Coulthard's decision to slow down dramatically and hold up the field behind his Ford teammate Scott McLaughlin, who went on to claim his maiden Great Race on Sunday.

Officials hit Coulthard with a drive-through penalty during the race for breach of safety car procedures but are expected to have a second look at the incident to see if it influenced the outcome of the 161-lap race.

A then third-placed Coulthard controversially slowed down and backed up the rest of the field as top two Jamie Whincup and McLaughlin raced to their garage for a pit stop to get much-needed fuel during the safety car period with 26 laps left.

At the time Coulthard looked to have ensured a two horse race between Whincup and McLaughlin for the title after his go slow approach during the yellow flag ensured a huge gap between a hard charging Shane van Gisbergen and the leading duo.

Coulthard's snail's pace also ensured he avoided double stacking, or waiting behind his teammate McLaughlin in the pits.

"Fabian should get a penalty for that, going stupidly slow. That was shocking."

McLaughlin went on to hold out a fast-finishing van Gisbergen by 0.68 seconds to claim his first Bathurst crown.

Coulthard may face further sanctions after stewards reopened the probe but his team, DJR Team Penske, dismissed the incident on Sunday night.

"Look I am not sure if that made the difference to who won the race," said American motorsport great Roger Penske, the majority owner of Coulthard's team DJR Team Penske.

"We can look at it and talk about it but it is secondary as far I am concerned when you think about it.

"Everyone had a chance, and the two top duelled it out in the end and the outcome was what we wanted."

Coulthard's team boss Ryan Story insisted there was a problem with overheating in the car at the time of the controversy.

Van Gisbergen clearly wasn't happy about the incident. "We certainly did get knocked down a few times today," Van Gisbergen said. "In the pits and then working back through the pack and got held up during the safety car by someone.

"It's pretty obvious what happened but we still would have had to fight it out with Jamie and Scott which would have been awesome and possibly closer but we were stuck behind traffic and more cars, but it is what it is."

"That car (Coulthard) has been the sacrificial lamb all year (for DJR Team Penske)," he added.

Supercars legend Mark Skaife said after the race that DJR Team Penske had used "gamesmanship" to keep McLaughlin ahead of van Gisbergen during his final pit stop.

"If you want to be glass half empty, you say they purposely slowed the whole field down to create the gap they needed to create to give the buffer they needed versus van Gisbergen," Skaife said.

"But also to give them a buffer to ensure they don't have to double stack. So if you want to play it all out, clearly there is a five car-length rule that you're supposed to observe. Clearly that was outside the rules. It was massive gamesmanship and I'm sure the was plenty of controversy from the Red Bull garage next door. There was a bit more gamesmanship than what we first thought." 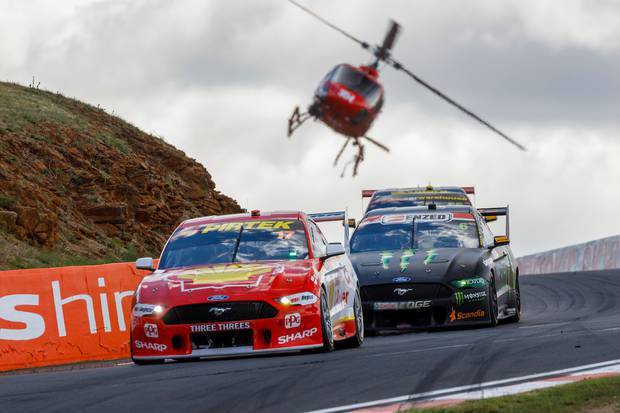 The 2019 Bathurst 1000 came down right to the wire when a safety car gave McLaughlin some breathing room with just three laps remaining as rivals Shane van Gisbergen, James Courtney and Jamie Whincup breathed down his neck.

In a fight right to the final corner, McLaughlin held off van Gisbergen by just 0.68 seconds. James Courtney finished third while Jamie Whincup just missed out on a spot on the podium.

"I can't believe I bloody won the Bathurst 1000," McLaughlin said after earlier breaking down in tears immediately after crossing the finish line.

"I have dreamt about this. I put so much pressure on myself to make this a good one but I am so proud of this team."

The extraordinary finish was overshadowed by three huge moments of drama that earlier saw the race reach boiling point.

On a day of high drama, McLaughlin was able to win his first Bathurst crown as:

Just one of the 161 laps remained by the time the race re-started after the eighth and final safety car left the track, setting up a nail-biting finish. But McLaughlin held out hard-charging fellow New Zealander van Gisbergen, denying the Holden star his first Bathurst win.

Leading Ford drivers Waters and Mostert – looming in third and fourth respectively – appeared threats but came into contact, ploughing into the gravel together on lap 124 to prompt a safety car and end their title quest.

Mostert made contact with Waters and both ended up in the gravel at The Chase, much to the disbelief of their livid team bosses in the same Ford garage. Mostert incurred a pit-lane penalty and finished 16th while Waters was 21st in the 26-strong field.

A total of 201,975 people flocked to Mount Panorama over four days.

Here's how it finished: