The NRL has another eye-gouge drama on its hands on the eve of the finals after young Raiders forward Hudson Young was caught with his fingers in the eyes of another player.

The ugly moment came in the 30th minute when the New Zealand Warriors' Adam Pompey scored to make it 12-all.

The Warriors would go on to win 24-20 and resign the Raiders to a final match against runaway minor premiers the Melbourne Storm in week one of the finals series.

But in the modern game with cameras everywhere, there was little chance it would escape for long.

It's a bad look for the game, which has had several eye-gouging issues this season, including the Rabbitohs' George Burgess, who copped eight weeks, and Young, who already sat out five weeks for an eye gouge. 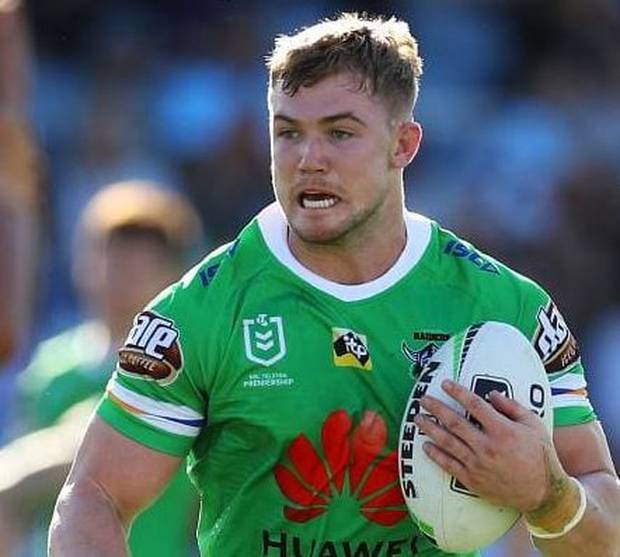 "That is not what our game is about, that's a disgraceful act. Look at the pressure on his eyes here, that is terrible."

The former NSW halfback unloaded on the young forward, who will be under scrutiny for a second time this season for an alleged eye gouge.

"He should react, he should put one right on his chin, "And this is a bloke who spent five weeks on the sideline, you can't attack the eyes of an opposing player."

The commentators noted Young had seen himself on the big screen and looked worried.

"He knows he's done it in the first half and he's a repeat offender, that's a disgrace," Finch said. "He'll be disappointed, Ricky, he doesn't coach players like that — that's crap. It's really poor.

"He could go from anywhere from 12 to 20 weeks. Why shouldn't he? That's pressure on someone's eyes, he's done it before and he's only just came back. He went for two cracks at it. George Burgess got eight weeks. That's really poor, we don't need that in our game, it's a disgraceful act in my opinion.

"Clearly six weeks wasn't enough, go spend six weeks on the sideline young fella. How do you get that habit in your game?"

"What's going on? Why would he even think about doing that?" Alexander said. "That's a complete lack of self control. I've got no idea what would make him do that after sitting five weeks on the sideline. The first one doesn't look too bad if you play it in normal speed but to have a crack again, he'll be in trouble.

"He won't be playing semi-final football, that'll be the end of Hudson Young. I don't think it matters how far they go, he won't be there."

Young pleaded guilty to an eye gouge on the Canterbury Bulldogs' Aiden Tolman earlier in the year and was awarded a five week ban in June.

People on social media were quick to slam the 21-year-old forward.

"He had two snaps at him, I didn't think it look real pretty," Kearney said.

"I've only briefly seen it again, I know he didn't gouge the kid, but there was a hand on the face from what I've seen from the video," Stuart said.

"It's something I've got to look at again and get a clearer version of it. It reminds me of the Josh McGuire incidents where he got fined for whatever's on the face."

Stuart said he asked Young about the incident and he said he didn't gouge Pompey and spoke to the Warriors player after the game.

"I don't condone any of this, if it was an eye gouge though, the kid would reel out that and he didn't," Stuart said. "I try to answer these as honestly as possible, if the hand was on the face, I don't know why but he did go for the ball. I hope for the kid's sake, if it is anything, it's the same as what Josh McGuire copped."

Canberra blew an eight-point lead in the final 12 minutes against the Warriors.

The Warriors' win also locks up the other qualifying final in which will the Roosters will host South Sydney.

Canberra rested four players and were not in the form which took them to second top-four finish in 16 years.

The Warriors were playing for pride but started the stronger at GIO Stadium as Taane Milne played his first game for the club after a drug ban.

However, it was an incredible piece of athleticism from Raiders back-rower Elliott Whitehead which led to the first try of the game.

Jack Wighton grubbered into the in-goal before Whitehead made a superman dive over the dead-ball line and batted it back for Seb Kris to score.

The Warriors hit back through Lachlan Burr, who crashed over from close range on the back of three-straight penalties on 20 minutes.

The Warriors took the lead when Adam Blair popped a pass to Pompey but the lead only lasted four minutes as Josh Papalii barged over.

The Warriors celebrate their match, winning against the Canberra Raiders. Photo / Getty Images

The sides looked set to head into halftime at 12-12 before Canberra hooker Josh Hodgson sold a dummy kick and dummy pass to score with the final play.

Raiders winger Michael Oldfield dashed 50 metres down the sideline to score in the corner but injured his shoulder in the process on 54 minutes.

The Warriors scored one of the tries of the season when Roger Tuivasa-Sheck began a fifth-tackle play on halfway that went through 13 sets of hands before the skipper finished what he started.

Warriors halfback Blake Green completed the comeback with a show-and-go in the 76th minute to score next to the posts.