Rugby commentator Murray Mexted shares his thoughts on the Crusaders victory above. For more analysis, Patrick McKendry from the New Zealand Herald offers his take below:

Before the Crusaders got on with the serious business of celebrating Super Rugby title number three in three years, they lifted the lid, or perhaps popped the cork, on how they dealt with the potential emotional drain of so many players leaving after this season.

Or, more to the point, how history-making head coach Scott Robertson did it. One of the many strategies thought up by the man known as Razor, the first coach to win three titles in a row, was to refer to the impending departures of Kieran Read, Ryan Crotty, Owen Franks, Matt Todd, Jordan Taufua and Sam Whitelock (for one season), throughout the year rather than leaving it until the playoffs to address and potentially distract.

It was possibly only a small piece of the puzzle, but it was an important one, and it's more evidence of the 44-year-old's attention to detail and ability to inspire.

Robertson also won three consecutive titles as a player. His is a record that will not be broken for a long time, and there will already be talk of another title in Christchurch. Possibly the only barriers to him achieving a lot more success at this level are the departures of such world-class players and the fact he is firmly in the frame as Steve Hansen's successor at the All Blacks.

Crotty was unable to play the Jaguares in the final, won 19-3 by the Crusaders, due to a broken thumb, but he presented the jerseys to his teammates beforehand and they responded with utter commitment; especially Todd, who put in an incredible performance in the No7 jersey, but also Read and Whitelock.

"It's all here," skipper Whitelock said of the talent available to Robertson, "but he's challenged people to get better and to grow. Everyone's done that whether you've been here for a couple of months or 150-plus games. He has the ability to grow players but also grow the coaching and management staff too. We've got an amazing set-up." 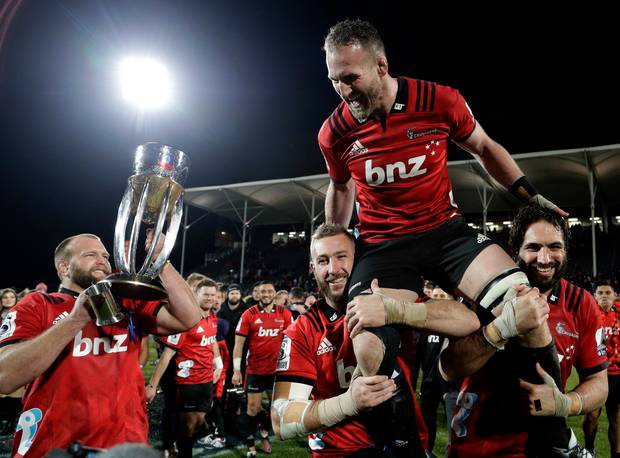 Crusaders Kieran Read is held aloft by teammates as he celebrates after they defeated the Jaguares 19-3 to win the Super Rugby final in Christchurch. Photo / AP

Whitelock revealed that such was Robertson's lateral thinking as he attempted to mentally stimulate his players that he often had no idea what to expect when he turned up to training. Some ideas were left alone, others wholeheartedly embraced.

Asked how this title compared with the others, Robertson said: "The first one I was excited, ecstatic, 'how good is this?', the second one was relief and that one was 'thank God for that'. Honestly, there are so many people leaving. There was a lot of emotion. Thank God we can send them off on the right note.

The Jaguares came to knock a few bodies around in their first ever grand final, and they certainly did that. How there were no serious injuries suffered by either team almost beggars belief, and All Blacks coach Hansen will be thrilled there were no obvious issues suffered by his 11 All Blacks in the Crusaders a couple of weeks out from the Rugby Championship.

In the end they didn't have the attacking quality to seriously challenge the Crusaders at the end of one of the home side's most difficult seasons.

"I must admit it's been a different week," said Whitelock, who will take a sabbatical before returning to the Crusaders in 2021. "It's been up and down. Obviously Ryan Crotty, who I've known since I was 16 or 17 - I've played a lot of rugby with him, seeing the emotions he's gone through… it's been difficult for me but the cool thing is the guys who are staying have learned a lot from those guys.

Of Todd, he said: "For him to play his last game here as a Crusader, and the way he played, just shows his class. I thought it was really good from all the guys who are leaving; they all put their best performances out there."

For All Blacks skipper Read, the key to winning another title before he heads to japan after the World Cup was obvious. "To get a lead in a game like that is really important, and to be able to play without the ball is too. It's talked about a lot but championships are won by defence."