It's playoff time! The NFL field is slowly being whittled down as we inch closer to the Super Bowl.

Just four teams remain in the hunt and this week, the Herald's Christopher Reive and Radio Sport's Alex Chapman, Nigel Yalden and Marc Peard share their thoughts on which teams will be moving on to the Super Bowl. 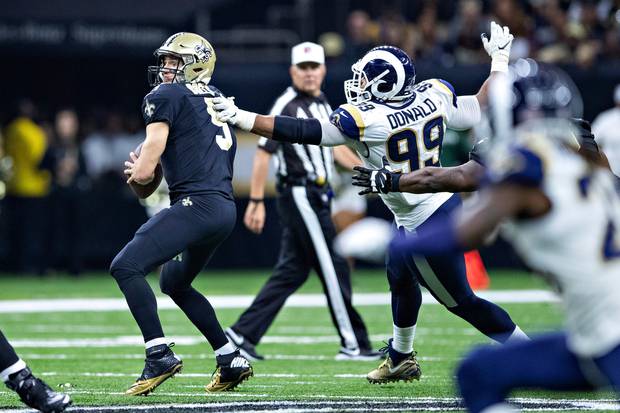 How fun was it the last time they played?! 80 points and 970 yards of offence as the Saints ended the Rams' undefeated start to the season in week nine. But there's one big difference since then - CJ Anderson. No, not the Black Caps allrounder, the running back the Rams picked up after he was waived by the Raiders. He's turned into a fantastic running option alongside Todd Gurley. The Rams have also allowed less points and passing yards since Aqib Talib returned in week 13. But the Saints have Drew Brees and "it's our time" and "it's Drew's time". Heart can be a huge motivator.

Prediction: Saints to win, but Rams to cover the spread.

CR: I'll get this out there early - I love both these teams this year. So as a neutral fan, I cannot wait for this game between these two offensive juggernauts. And when I say offensive, I don't just mean at quarterback. Both the Rams and Saints have outrageously good receivers and running backs, and quality in the bulk up front. The Rams, who were the league's second best team in total offence in the regular season, are underdogs here for sure, but don't count them out. The Saints weren't all that convincing against Philadelphia last time out and while they're one of the best rush defences in the game, they are susceptible to the passing game. What could win or lose it for the Rams is the offensive play calling and making sure they're exploring all avenues early before opening up the Saints in the air late. Expect a massive game for Rams defensive powerhouse Aaron Donald, too.

Prediction: Rams overcome the home crowd to win by six points or fewer with Brandin Cooks snaring 100 receiving yards against his former team.

MP: This will be a fun game and has all the makings of an NFC finals classic between two teams with strong running games and two teams who can pass long. I would love to see the Rams win but to do this they will need to stop New Orleans short passes. The Rams need Saints quarterback Drew Brees to hold the ball as long into his progressions as possible, thus giving their star defensive tackle Aaron Donald the chance to get through and rush/disrupt Brees. If LA can do this, they can win.

Prediction: I expect this to be a close one with the Rams to progress to the Super Bowl on a late field goal.

NY: This is going to be barrel-load of fun. If you like your American Football hard and fast, I reckon you are going to love this game. Both are great offensive teams, but as the cliché goes "defence wins championships" and last week, the Saints defence stepped up after taking a couple of early shots to the chin. For me, that improvement will be the slight difference in a game which appears to be so evenly matched across all aspects of the game.

Prediction: Both teams bust out a couple of trick plays each, with one Rams attempt at "trickeration" costing them field position and ultimately the game. 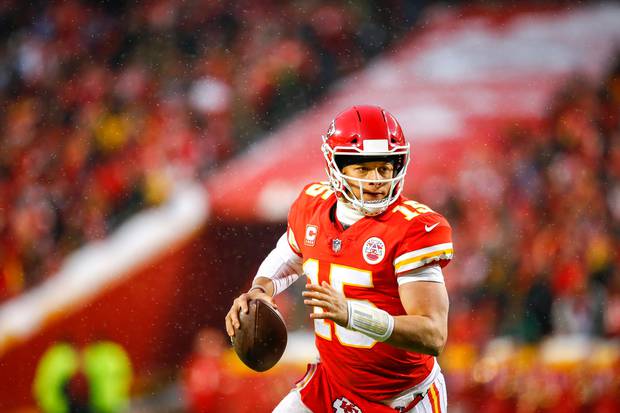 Patrick Mahomes has established himself as one of the most dominant quarterbacks in the NFL. Photo / Getty Images

Reverse-jinx, reverse-jinx, reverse-jinx. The Chiefs will win … right? Tom Brady's too old aye? This is the match where the mantle is passed from G.O.A.T to kid. But the "no one believes in us" storyline is ringing true with the Pats; a storyline which isn't overly familiar, at least in recent times. The last time the teams played (week six of this season) the Pats surprised a lot of people by winning. But Patrick Mahomes would have learnt a lot from that game. And it shows. I've harped on a lot about how great this youngster is, and he continues to impress. He was bloody good last week in his first playoff game. But, it's Brady. And it's playoff Brady. And it's playoff Brady with Belichick.

CR: My biggest question in this one is over how many yards the two quarterbacks are going to combine for. Patrick Mahomes, the young flamethrower who led the league's most effective offence, taking on New England great Tom Brady, who has shown repeatedly his will to win and ability to get the job done. In the regular season, neither of these teams were all that flash defensively and simply scored more points than the other team to win (funny how that works). But in the playoffs the Chiefs have shored things up, both in passing and rush defence. The running game of Sony Michel could again be the key for New England, as all eyes will be on Brady, but it's tough to see them stopping the Chiefs.

Prediction: Chiefs win by 10 or more; Mahomes and Brady combine for more than 600 passing yards with at least 60 points scored in the match

MP: In my opinion, Patriots quarterback Tom Brady is the greatest cold weather quarterback of all time and the same when it's win-or-go-home time, hence there is no better player to have on your team for this game than Brady. We know it's going to be freezing cold at Arrowhead Stadium and we know the Chiefs will want to play well in front of their home fans. I'm looking at the run defence of the Chiefs with pity; expect a high amount of crafty short passes, quick slants, screen passes and dinky runs that strangle the fun out of home crowd and leave as little time as possible for the Chiefs offence to get comfortable or confident. If they achieve this, the Patriots will be in the Super Bowl. I have no reason to believe that the Patriots won't win this one, but I want to see the Chiefs win. So against any sage advice I've offered you, I'm picking the Chiefs to grab a few quick turnovers and blast out to a quick lead, forcing the Patriots to play expansive and ultimately not being able to hang with the Chiefs high-octane offence.

NY: The temperature is expected to be -17C … MINUS SEVENTEEN DEGREES PEOPLE! Every fibre in my body tells me that this, along with the magnitude of the game, Chiefs coach Andy Reid's playoff history versus the legacy that is Patriots coach Bill Belichick's career (a career forged in these types of scenarios) and a young (albeit outrageously talented) quarterback versus the greatest of all time, should be a comfortable Patriots victory… but as stated repeatedly, I don't like the Patriots – never have, never will - so let's go Chiefs… please.

Prediction: Anyone but the Sith Lords of the NFL.