The New Zealand Breakers are at the lowest point in its new ownership era.

What began as a promise to bring "exciting and winning basketball" to fans while giving back to the community, has devolved into a farcical state of off-court issues, a gutting of the club's Kiwi identity, and a list of controversies within a franchise that used to bill itself as a club of "family values".

After yet another "incident" emerging this week, here's a brief history of unrest and controversy at the Breakers since its ownership change:

Less than a week after Breakers great Kirk Penney announced his retirement from the game, the Auckland franchise ushered in a new era with the announcement of a new ownership group that would take over from long-time owners and directors Paul and Liz Blackwell, who would step aside as majority owners.

The new ownership consortium, headed by former NBA player Matt Walsh, promised to lead the franchise to "a path to profitability" at a time when the team was struggling on the court while crowd attendance was in decline.

"Our goal is to bring exciting and winning basketball for our fans, to give back to the community, and make the Breakers a sporting ambassador for New Zealand," Walsh said. Paul Blackwell and Matt Walsh during a press conference to announce new majority owners of the Breakers. Photo / Photosport

"I think we're going to be able to bring some resources in terms of our NBA connections that will help the Breakers, and I also think we have some global sponsorships and commercial know-how that will help on that side as well."

Paul Blackwell, who stayed on as a director and minority shareholder, said at the time that the consortium led by Walsh is just as committed to maintaining the club's family values, something which recent events could suggest otherwise.

"We talked a lot about the fit necessary to maintain the core beliefs that the Breakers have grown from – the values and behaviours that are acceptable in our minds and the minds of the fans," Blackwell said.

"Matt and I shared a familiar family focus and belief in foundations and principles."

New owners of the Breakers:

In a move that shocked new owner Walsh (and everyone else), then-Breakers coach Paul Henare decided to step down from the club after two seasons in charge and 15 years at the club as player and coach.

"I don't think money was ever going to be an issue. We were a little caught off guard," said Walsh of Henare's decision.

The appointment of the American Brasswell – a household name in New Zealand basketball circles who, as a player, helped the Breakers to their first Australian NBL title – was the first major appointment under the Breakers' new ownership structure, a promising sign at the time of the club's commitment to fostering local (or at least Kiwi-adjacent) talent.

However, it would just be the start of a messy off-court storm that would threaten to define the Breakers' new era.

The Breakers confirmed that they would play the Phoenix Suns in Arizona as part of the NBA pre-season, marking the first time a New Zealand side would take on NBA opposition.

"I can't think of anything more high profile than this," Breakers General Manager Dillon Boucher said at the time.

"With our connections up in the States with [new owner] Matt Walsh and his ownership group and through the NBL, it helped make the game a reality." 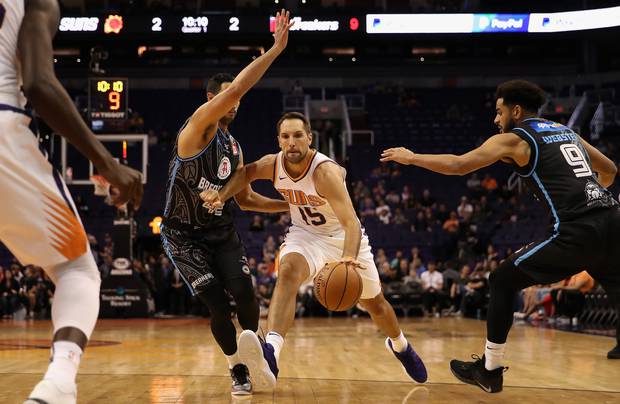 Ryan Anderson of the Phoenix Suns in action against of Tai Wesley and Corey Webster of the Breakers. Photo / Getty

The value of the Breakers' guerilla marketing campaigns, revamped social media presence, and Walsh's influence in the American basketball and media market was clear to see after the first few months of the club's new ownership.

However, it all seemed to clash for the first time with the club's supposedly long-held "family values" after the team unveiled controversial website Barstool Sports as a shirt sponsor.

Barstool Sports, a sports and pop culture blog based in the US, has been long criticised for the site's offensive content. Its founder Dave Portnoy has landed himself in hot water regularly, including for a comment suggesting size six women who wear skinny jeans deserve to be raped and was accused of allegedly promoting social-media harassment towards female sports writers.

The Breakers' ownership consortium, headed by Walsh, also includes the hosts of Barstool's vastly popular Pardon My Take podcast Dan Katz, Henry Lockwood and Eric Sollenberger, but none of them have been linked to such controversies personally.

After featuring the Barstool Sports logo on the team's uniform on the biggest international stage of the club's history against NBA team the Phoenix Suns – and the emergence of outrage from some fans and media – Walsh defended the partnership, saying there were no regrets.

"We partnered with Barstool because I have a relationship with them and I believe that they're good people in their heart. If you look at the charity work they've done it's incredible," Walsh said.

"I don't agree with all of the comedy angles that they take. But at the end of the day Barstool Sports produces comedic content. And it's satirical in nature.

"We still stand for the same family values that we've had for the last 15 years."

The Barstool partnership was seen by some as one of many worrying red flags of the new direction the Breakers were heading.

The Breakers signed point guard RJ Hampton, a player widely considered to be a first-round pick in the NBA draft next year.

Hampton decided to turn his back on multiple offers to play for top US colleges in order to kickstart his NBA career through the Breakers.

"It's an honour to be a part of the NBL's Next Stars programme and to be joining a team with such a successful history as the Breakers," said Hampton.

After teasing a "big announcement" for a while, the Breakers finally put to bed speculation about who will join the club with the Hampton signing.

But before the announcement, rumours that 10-time NBA All-Star Carmelo Anthony was on the verge of joining the Breakers started circulating social media, which eventually made its way into mainstream media.

Walsh would later clear up how the speculation started, revealing that he was the one who planted the Anthony rumour in an attempt to find a mole within the organisation.

"I had to throw out a little misinformation to identify the leak," Walsh said on the Pardon My Take podcast. "We're still working through that.

"Basically, I put it out on our group WhatsApp. Everyone asked what the big global news was going to be, so I put a picture of 'Hoody Carmelo' up and about 10 minutes later, it was all over New Zealand media.

"We've got a big leak in the organisation, so we're working through it now. I think all things considered, we did a pretty good job keeping it contained."

Apart from being an example of Walsh's bizarre, almost Trumpian brand of management, the purposeful "leak" also revealed unrest within the team. 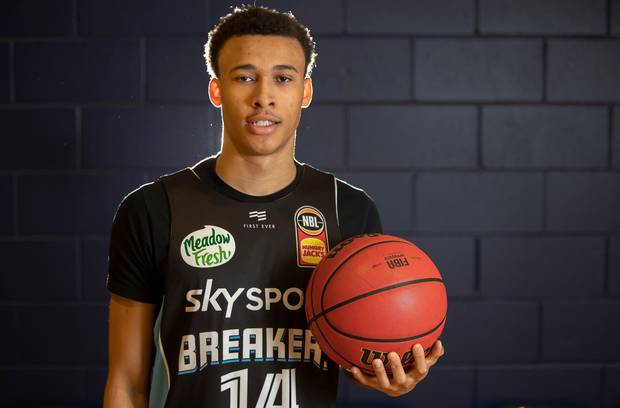 After leading the Breakers to a disappointing campaign in just his first season in charge and with two years left on his contract, Braswell was reportedly forced out of the club, leading to "legal proceedings" resulting from the termination of his contract.

The Breakers finally confirmed in July that Israeli coach Dan Shamir would take over from Braswell as "director of basketball" – a nominal title only required because of the legal ramifications from Braswell's terminated contract.

Dillon Boucher, a club legend who took over as general manager in 2016, quit from the role just a month out from the start of the 2019 ANBL season.

Walsh said Boucher had simply decided to move on, with neither parties expanding on the shock decision to step down so soon before the start of the new season.

"Dillon looked at the bigger picture and felt he was ready to do something else," Walsh told 1 News.

The Breakers denied a release request from an unsettled Corey Webster, saying that in the absence of a buyout, the star guard – unlike Braswell – would be required to see out the remaining two years of his contract.

Walsh also had to clear up suggestions that he told Webster he was the worst guard in the NBL.

"What I said to his agents was statistically he was the worst starting two-guard in the league last year ... I believe in Corey and I've told him as much." 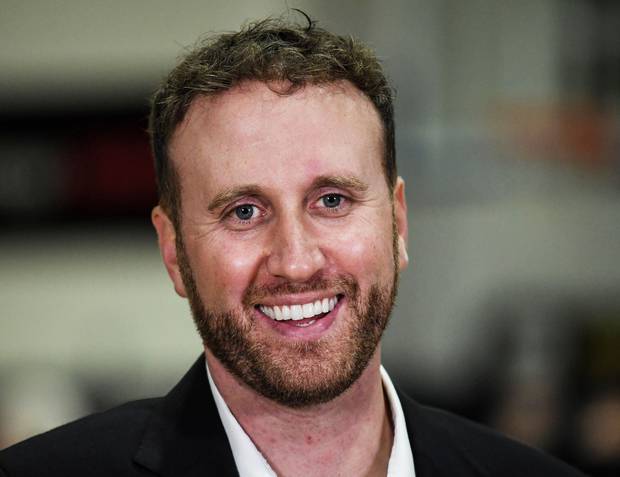 Just six days before the Breakers began their ANBL season, assistant coach Mike Fitchett sensationally informed Walsh that he was leaving his role at the airport as the club began their long journey back from their pre-season games in the United States.

After the shock resignation, Walsh said he "didn't want to hear a whole lot" from Fitchett about his reasoning and didn't go into details.

"I had already known what was coming because he had told other members of the staff," Walsh said.

"To be resigning six days before the season after coming on an NBA trip like this, I wasn't interested in hearing a whole lot from him."

Breakers American import Glen Rice Jr was arrested reportedly over an alleged assault with intent to injure after an incident at an Auckland bar.

Rice Jr has a chequered past that is well-documented, but it didn't stop the Breakers from signing him earlier this month, saying at the time that they were hopeful he could be a positive influence on the team thanks to the club's supposed "stability".

"The stability and underlying values of the Breakers is exactly the environment someone like Glen needs to focus on being the best player he can be," Walsh said at the time.

When asked if he was comfortable if the club had a new "bad-boy" image after the arrest, Walsh said: "That's certainly not the intent.

"If that's the narrative people want to create, that's fine."

Rice Jr was suspended from the club indefinitely. 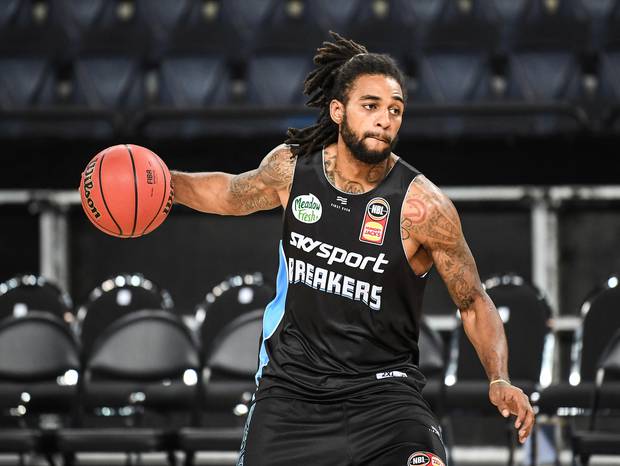 Returning to New Zealand from Perth on Sunday, the Breakers team caught an overnight flight which ended with police waiting for forward Tom Vodanovich at Auckland Airport.

Vodanovich admitted that alcohol and a sleeping pill left him loud and intoxicated on a long haul flight, but didn't think his behaviour warranted police intervention. No charges were laid.

Speaking after the spate of off-court incidents, Walsh vowed to keep taking risks with the Breakers, rejecting suggestions that the club is going downhill since he purchased it from the Blackwells early last year.

Even though the Breakers had a winning team with a glowing image under the Blackwells, Walsh claimed it was not a healthy business.

"I think you have to be careful there in terms of what you define success as. No question the Blackwells did an amazing ob," Walsh told Newstalk ZB this morning.

"I'm not the Blackwells and I'm never going to be. I'm not apologetic about that. There's a reason the Blackwells were trying to find a buyer for this team for over a year.

"I saw the opportunity – we're going to get there with the wins and losses."

The question currently on everyone's mind is: at what cost?