Steven Adams has produced one of the plays of the NBA season to help his Oklahoma City Thunder side pull off a miraculous victory over the Minnesota Timberwolves this afternoon.

Up by two points with 1.1 seconds to go, the Timberwolves were hit with a delay of game due to big man Jordan Bell having his jersey untucked. That gave the Thunder a technical free throw, which Danilo Gallinari sunk to reduce the deficit to one.

However, with the Thunder having no timeouts, all Timberwolves big man Karl-Anthony Towns had to do was intentionally miss a free throw – as once the Thunder grabbed the rebound, they would have had no time left to get a shot off.

Instead, he made the free throw – and that's when Adams produced a piece of magic.

Adams hurled a one-handed, football-style 'Hail Mary' pass down to the other end of the court, where Dennis Schroder reeled it in and immediately threw up a layup, which went in, to send the game to overtime.

In overtime, the Thunder made no mistake with their unexpected second chance at victory, cruising home to take an eventual 139-127 win.

Schroder said the play was something he and Adams had been working on.

"We had been talking about it a couple of times before. I just lose my man, try to sprint as fast as I can, and he made a hell of a pass." 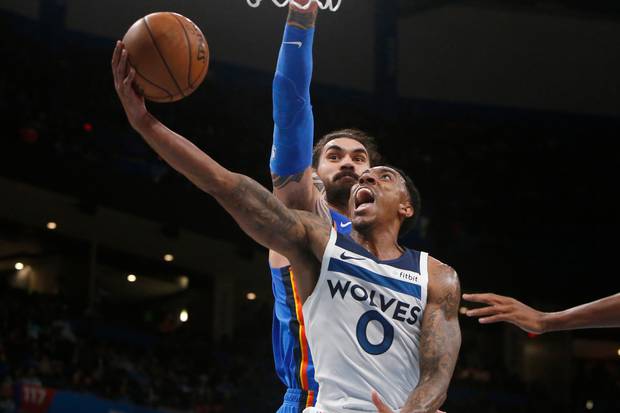 It was part of an excellent all-around game for Adams, who ended with 22 points on 9/13 shooting to go with 11 rebounds, two assists, two steals and four blocks.

The Thunder move to a 9-12 record with the victory, while the Timberwolves slip back to 10-11.