Listen to the audio above as Craig McMillan speaks to Radio Sport's Adam Cooper.

Black Caps captain Kane Williamson has acknowledged that his team were "exposed" in their three-test mauling by Australia.

Ruled out of the third test due to illness, Williamson watched on at the SCG as the Black Caps succumbed to an embarrassing 279-run defeat to cap off a 3-0 series whitewash at the hands of their trans-Tasman rivals.

It was the Black Caps' third defeat of 240 runs or more, and they never held any periods of dominance; pushed onto the back foot from the start of the day-night test in Perth, and never recovering.

The incredibly lopsided nature of the results left Williamson no choice but to lament the fact that his team were thoroughly outplayed. 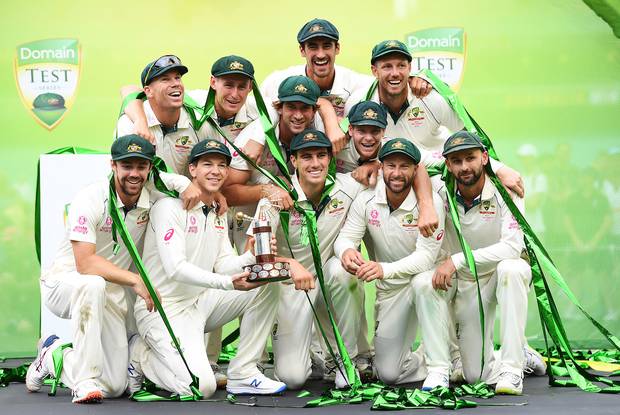 Australia celebrate after claiming the 3-0 series win over the Black Caps. Photo / Photosport

"We got exposed in a number of respects over here with an outstanding side in Australia with a fantastic bowling attack," Williamson said.

"It's just not one or two things, it's a number of things – basically, in all departments we were outplayed. With the ball in hand there was an incredible effort throughout the series, but at the same time, we really did struggle to put them under pressure for any period of time, to pick up wickets in clumps, and then a lot of credit goes to the way Australia played with the bat as well.

"With the bat, it was kind of the reverse situation, where we weren't able to get any partnerships together to create any sort of first-innings total to apply any pressure."

Williamson acknowledged some small positives – the effort of the undermanned bowling group, and the performance of some of the players thrust into the team at short notice – but knows that means little in the grand scheme.

"It's quite hard to reflect on small parts, as a captain you're looking at the bigger picture, and there's a number of things to work on and improve on, and I know for a fact that all the guys that have been involved in this series will walk away and have a strong desire to improve from it.

"It's important as individuals and a group that we do use this experience to be better for it as players, but collectively come out of it stronger. We've got a bit of time off before our next series, but also so much to learn from this experience.