Two spectators at Bay Oval have come forward to say it was an English supporter, not a New Zealand fan, shouting what Jofra Archer says were "racial insults" during the test match in Mount Maunganui on Monday.

NZME has also reviewed video footage from the match, which appears to confirm that a racist comment was shouted out from the crowd at least once while Archer was batting.

Archer, 24, posted a message on social media on Monday night, after his side lost the first test match to the Black Caps, saying it was "a bit disturbing" hearing racial insults while batting to help save his team late on the fifth day.

Archer could be seen talking to security at the boundary fence as he left the field after being dismissed.

He also said on Twitter on Monday night that the Bay Oval crowd had been amazing all week "except for that one guy".

A bit disturbing hearing racial insults today whilst battling to help save my team , the crowd was been amazing this week except for that one guy , @TheBarmyArmy was good as usual also

Archer later told ESPNcricinfo the abuser had been making comments "about the colour of my skin".

Now, two Tauranga brothers sitting near the scoreboard at Bay Oval on Monday have come forward with what they say they heard.

They said a man near them wearing a black top was yelling out a particular sentence, which included a racial insult, while Archer was batting.

NZME has chosen not to publish the sentence, but has reviewed Sky Sport coverage of the match and just before the fourth ball of the 94th over is bowled, it appears that exact same insult can be heard shouted from the crowd.

After the ball is bowled, Archer appears to look over to the scoreboard area of the ground. 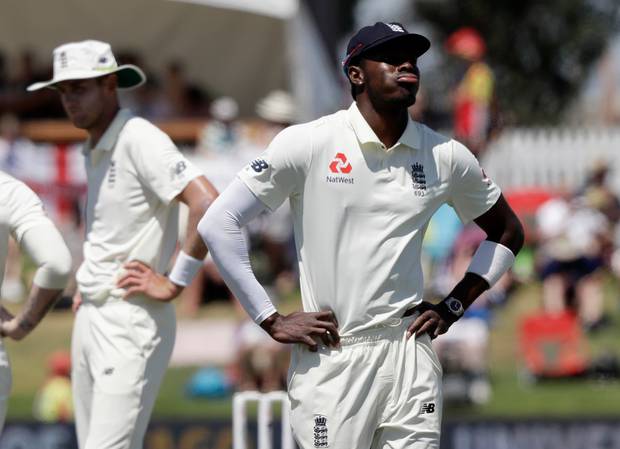 The brothers, who did not want to be named, said the man's comments went completely over their heads at the time and they did not know what he meant or that it was racial abuse.

They said there was security in the area and that maybe security officials did not understand the implication either, or the Black Caps and umpires, for that matter.

But the brothers said surely other players or officials heard the comments on the field, if Archer could.

One brother said he shared what he heard and saw, and a description of the man, with New Zealand Cricket. The other said he had also contacted the organisation and left a message.

They both said the man was clearly an English supporter with what sounded like an English accent, who was "cheering or jeering his own team".

He said there needed to be a clear understanding of when exactly the comments were heard, "because if it's during the game while he was batting, the gentleman under the scoreboard was yelling at him, yes. But if it was made as he walked off the field, then this gentleman probably isn't the one".

Both brothers said they did not hear the man yelling out as Archer walked off the field after being dismissed.

They said the New Zealand supporters in the area were actually clapping and laughing at the English supporter in question about the wicket, as he had just shouted something out before the ball was bowled.

Both brothers were absolutely certain, however, that they did hear the man shout that particular abusive sentence while Archer was batting in the middle.

"This guy chose quite quiet, specific times, when the bowler was just walking up to his run-up so it was quiet and he'd yell out. And you can hear it – I've just watched it on TV this morning, the highlights, you can hear him in the background yahooing and barracking his players. It's fairly obvious, to me, just listening to it, that it's him," one brother said.

"This guy wasn't trying to hide it, he wasn't just sitting down on the picket fence just quietly whispering in peoples' ears, he was quite vocal."

The other brother also wanted to point out that the man was "completely separate" from the Barmy Army, who were sitting on the other side of the ground.

Archer has written in a column for the Daily Mail Online that "I don't want to go into the details of what was said but I know what I heard".

He wrote: "I thought members of the crowd around the guy might have pulled him up because I could hear him from the pitch as I was walking off.

"I guess they didn't. But I know I wasn't hearing stuff. I told the security guard what had happened and that was it."

New Zealand Cricket manager of public affairs Richard Boock said: "In terms of identifying the person responsible for the abuse at Bay Oval, this is an ongoing process and we won't be commenting on aspects or details of it until it's been completed."