After a demoralising tour of heavy defeats, dispiriting injuries and debilitating illness, the Black Caps finally produced just what the doctor ordered.

The first five sessions of the third test at the SCG had followed the same storyline of the opening two showdowns. Australia had racked up the runs, offering the Black Caps just the slimmest of opportunities, before tearing it away again. The New Zealand bowlers earned at least a bit of reward by quickly wrapping up a slogging tail, before their batsmen once again wandered out to face the music in the final session.

The last two tests, that final session had effectively decided the result. In Perth, the Black Caps ended day two at 109-5 in response to Australia's 416, and in Melbourne, they finished the day at 44-2 after Australia had plundered 467.

This time though, Tom Latham and Tom Blundell stood tall, providing the Black Caps with the platform they've been desperately requiring.

In what was the first session won by New Zealand all series, the openers blunted the fearsome Australian attack. Blundell blocked Pat Cummins into oblivion early, and Latham looked comfortable against Mitchell Starc as the pair reached stumps at 63-0, seeing off 29 overs. 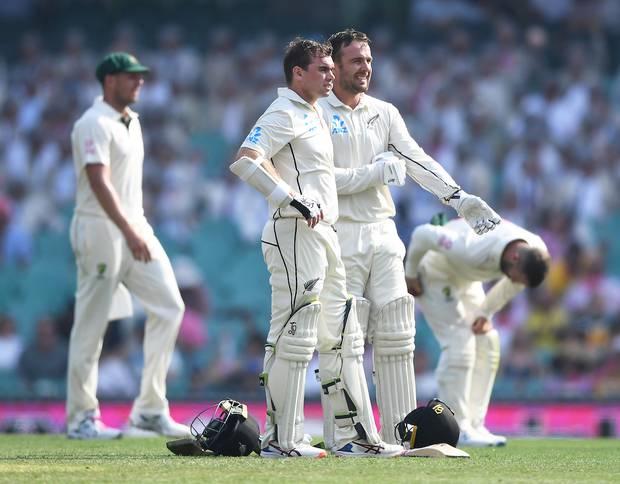 There's still a mountain to climb - trailing by 391 runs and with some inexperienced or out-of-form batsmen to come - but for the first time this series, the Black Caps will go into day three without the overwhelming feeling of doom and gloom.

It was a much-needed show of spirit after Marnus Labuschagne proved the thorn in the Black Caps' bowlers side, with the star of the summer continuing a remarkable run with his first test double century.

Resuming on 130, the man who now averages 63.6 in tests was less convincing than on day one – with multiple inside edges narrowly avoiding the stumps – but he was still accumulating at an excellent rate, and moving his feet well to loft Will Somerville. 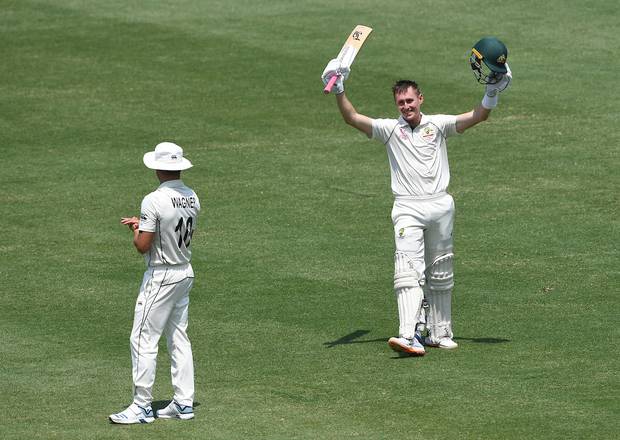 Somerville and fellow spinner Todd Astle both performed better on a day two wicket that started to show signs of significant turn. Somerville removed Matthew Wade in the first over as part of a lengthy spell, while Astle proved hard for the tail to play, and although he set a New Zealand test record with 32 overs without a maiden, he did pick up two wickets.

One of those was the prized scalp of Labuschagne, after he had reached 215. His double ton was brought up with an edge through a vacant slip cordon, but when he departed, caught and bowled off a leading edge, his job was well and truly done.

Such was his class that at some points it seemed the best way to dismiss him would have been to offer some vigorous handshakes and hearty congratulations from the Black Caps' ill players, a list that now includes Jeet Raval, who spent significant time off the park with flu-like symptoms.

Bowler Matt Henry was also added to the walking wounded, with x-rays on a blow he suffered early on day one confirming a broken thumb, though he did battle through it, splint and all, to remove Travis Head for 10.

Head's dismissal had reduced Australia to 331-5, giving the Black Caps a slight sniff if they could run through the tail. Eventually they did, taking the last five wickets for 44 runs, but that was after Tim Paine had joined Labuschagne with another handy contribution, guiding the hosts to 410-5 before the late rash of wickets.

Neil Wagner (3-66) and Colin de Grandhomme (3-78) again proved the pick of the bowlers, but for the first time this series, their efforts were backed up by the batsmen as some concerning early variable bounce was well-negated by Latham and Blundell.

Blundell, who played plenty of attacking shots in his historic MCG century, showed he can play the gritty game as well, blocking Cummins for 21 balls before getting off the mark. The pair offered one loose shot apiece, and Blundell survived a caught-behind review, but it was a rare sight this series – a period of utter control from the Black Caps batsmen.

They're by no means out of the woods yet – Nathan Lyon got enough turn to show he's going to be seriously dangerous as this test progresses - but just as it looked like a remarkably familiar scene was unfolding, the Black Caps re-wrote the script.