Benji Marshall wants another shot in the Kiwis jersey, but knows any future opportunities are contingent on his weekly form in the NRL.

After a seven year hiatus, the returning veteran justified his selection with a solid performance in New Zealand's 34-14 win over Tonga on Saturday night.

On an emotional night, where he was brought to tears before the match, Marshall combined superbly with Shaun Johnson, giving the Sharks half time and space to wreak havoc out wide and organised the team well.

The 34-year-old was targeted by Tonga's forwards, knocked over a couple of times, but kept fronting up for more.

"As much as I have enjoyed this week and really loved it, I want to get picked at the end of the year on the back of deserving it as well," said Marshall. "We have some great Kiwi halves in the competition and there were a couple that weren't there [on Saturday] and a couple that are pushing so just need to keep playing well week by week."

Marshall's fairytale comeback was the story of the week and that continued on Saturday.

He looked pensive as he walked onto the field, and admitted he was fighting back the tears when God Defend New Zealand began. 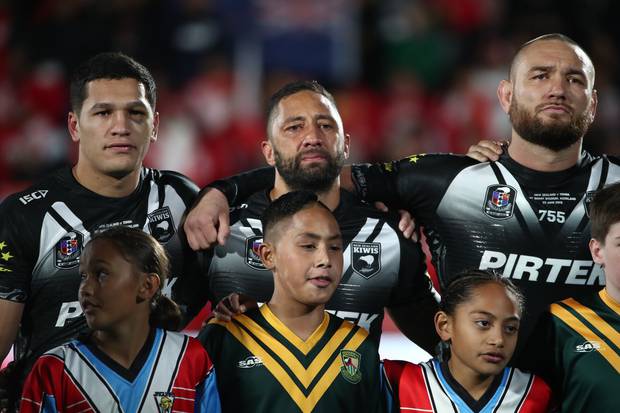 Benji Marshall had to fight back tears during the national anthem ahead of his return for the Kiwis. Photo / Getty Images

"At the time I realised my grandfather passed away last year, and he never got to see me wear the jersey another time in the last seven years. I thought about that, my wife and son were here, they came over last minute. For my son knowing that his dad played for the Kiwis and also getting to see it, that's something I'll treasure for life.

"When the anthem came I lost it there a bit. The boys stopped singing and they were saying 'We got you. We got you, koro.' The good thing is after that you do the haka, so you have to get your mind from thinking about your family and representing your country and go straight into war mode."

Marshall led a stirring haka, and then helped the Kiwis gradually wear down the Pacific nation.

While he played down his contribution, he paid tribute to Brandon Smith — labelling the young hooker the Kiwi's best — as well as other youngsters like Ken Maumalo and test rookies Briton Nikora and Jahrome Hughes.

Marshall had played 28 internationals before Saturday night, including a World Cup final and Four Nations deciders, but will never forget test No 29.

"I knew I missed the jersey, but I didn't really understand how much it meant to me until this week and that sort of moment [on Saturday]."

Marshall has been staggered by the goodwill generated by his return, as everyone across the sport can relate to his feel good story.

"I've been overwhelmed by the amount of support, not just from Kiwi fans but from people back in Australia," said Marshall.

The 297-game NRL veteran also sent a special message of thanks to the Tongan fans, who formed the vast majority of the 23,624 crowd in attendance.

"The way their crowd turn up to games and embrace international rugby league is great for the test arena. I liken that atmosphere on [Saturday] night to playing in a grand final in terms of noise."

Whether he is part of it or not, Marshall envisages a bright future for the Kiwis, who continue to turn the corner after the disastrous 2017 World Cup campaign.

"The result was awesome and something we really wanted," said Marshall. "We talk about leaving our jersey in a better place and where it belongs and that's up the top.
Leadership wise this is probably the best I have seen it [in the Kiwis], in terms of guys owning what happens during the week. I feel like there is something special building within this group and I was humbled to be part of it."