Shane Young stood in the centre of the octagon with his hand raised.

He had just knocked out Rolando Dy in their bout at UFC Fight Night Singapore in a display that would earn him a US$50,000 performance bonus.

It was his first fight in the UFC with a full training camp under his belt, after making his debut on extremely short notice in a decision loss against Australian Alexander Volkanovski.

But while the bright lights shone on the surface, underneath the 25-year-old featherweight was struggling.

Outside of the arena, he was dealing with the breakdown of a relationship and couldn't find the joy in the sport he'd dedicated the past 10 years of his life to. 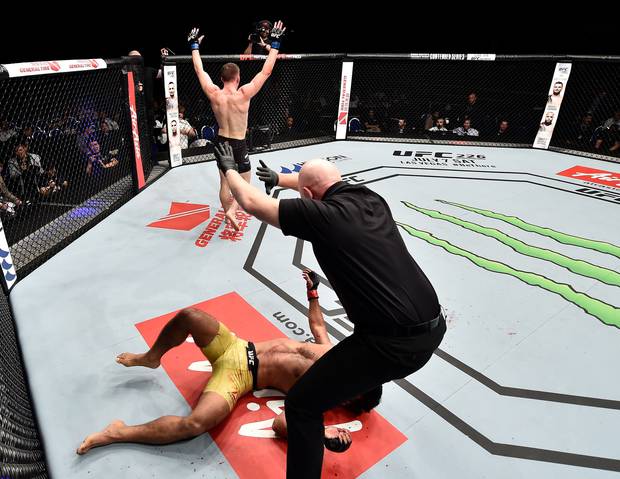 In September, Young requested to be stood down from his UFC commitments for the rest of the year and returned home to Napier to focus on his mental health and spend time with family.

"As soon as I went home, I thought I was done with fighting," Young tells the Herald on Sunday. "I was like 'I love this' – being back at home with my family.

"We're sacrificing a lot. Looking forward, I'm not an intelligent man but I can read what intelligent men write, and they say getting hit in the head isn't a good thing. I'm knowingly going into that so what am I going into that for? I thought it was for fame and money, which I got a bit of after (Singapore) but I had gotten a bit resentful to the sport.

"I thought f*** it, I'm going to be done with this. Then after two days I realised this was the reason why I even started (fighting) – for the community that I come from; to do something great."

A break away from the sport was simply something Young needed to have, and it wasn't until he was able to get away that he was able to really face is struggles. Simply through exercise and kōrero, he found what he believes many other young men need to discover – that it is more than okay to talk to someone about personal struggles.

"The only way I got out of what I got out of was from talks and exercise to just really expose myself to my feelings, not hide away from them," he says.

"That's the beauty of this sport, I take the analysis into real time – like 'I got hit, I won't get hit by that again' – it's the same thing with life. I got hit by too much too fast, and I didn't set myself any plans or prepare. But I'm fully prepared now" Refreshed and refocused, Young returned to training at Auckland's City Kickboxing gym earlier this month and the Herald on Sunday can confirm he will be returning to the octagon in February at UFC 234.

Young will join City Kickboxing teammates Israel Adesanya and Kai Kara France on the Melbourne card when he squares off against American Austin Arnett (15-6; 1-2 UFC) looking to pick up where he left off.

The 25-year-old, who on Christmas Day found out the bout had been confirmed, says it came at the perfect time and, since taking time away, having a fight books feels like it did when he was 15 and just starting out.

"I'm not looking past anyone, but I've got that same mentality as when I was young – it's all me all the time; the opponent is never the key thing, it's always just going to be me…just at the base of another mountain with the homies again."

But it's not just preparing for UFC 234 that has Young excited about the fight game again. He and fellow City Kickboxing fighter Dan Hooker have signed on as coaches for a charity boxing night early next year, with the event hosted to raise awareness about suicide.

For Young, it's a cause that now hits close to home.

"I've learned it's a lifelong process," he says of overcoming personal struggles. "Some people just choose not to even walk it. I see it now, people wear these faces…young men wear certain masks to cope with s***.

"It's awesome that I've gone through it though, because I'm comfortable in that uncomfortable situation now."