The kind of Nike shoes worn during the fastest ever marathon runs are set to be banned from competition.

Kenyans Brigid Kosgei and Eliud Kipchoge have both broken world records in the past year while wearing Nike Vaporfly shoes which boast technology that other shoe brands have, so far, failed to match.

Nike's invention contains a curved carbon plate built into the sole, which insiders claim "acts like a spring and propels the runner forward", according to a Times report. Nike has also developed a unique foam which is used in the sole, something they will not sell to other companies. 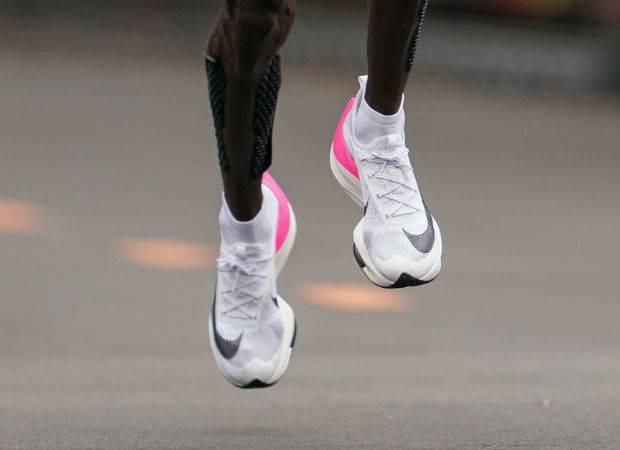 Now, World Athletics are reportedly set to ban the shoes from competition amid allegations they provide an unfair advantage.

A technical body is said to be reviewing the design of the shoe and will be revealing its findings later this month, The Daily Mail reported.

The shoe, which has a few versions, sells for up to $650 on the internet (and one supposed limited release model is being sold out of Britain for $2000). They are half that price out of official New Zealand suppliers, while the latest incarnation sells for nearly $500 in Europe.

But it is also dividing the athletics world with at least one stable of runners, aligned to a rival company, calling on authorities to examine the shoes which they claim are "ruining" the sport, stating they "don't want to continue with unfair athletics"

Equipment disputes are certainly not a new argument in sport – golf is perhaps the most obvious recent example, where rules around how long putters are used have been revised.

Different sports have taken different stances. Ten years ago, swimming banned a racing suit which supposedly reduced drag by 24 per cent and was worn by almost every winner at the 2008 Olympics. Yet in cycling, similar sorts of suits used by the impressive British team are legal.

It is almost indisputable that the shoe is leading to much faster times. Carbon plates have been inserted into other athletics shoes but Nike appears to have taken this a huge step forward for marathoners so to speak. The public has apparently flocked to them, testing supplies and presumably raising the internet prices.

Sports scientist Ross Tucker told the Times "at least four independent laboratory studies say that there is between a 2.7 and 4.2 reduction in oxygen use when wearing the shoes".

Claims include the shoes enable top runners to reduce their marathon times by two minutes.

The five fastest official marathon times in history have occurred in the last 13 months, all in the Nike Vaporfly.

Kosgei obliterated Paula Radcliffe's 16-year-old record in Chicago this week, a day after compatriot Kipchoge became the first person to break two hours for the marathon distance in a specially staged event.

Kipchoge called it his "moon landing moment" while Kosgei believes she can go four minutes faster saying: "I think 2:10 is possible for a lady…I am focused on reducing my time again."

About a decade a ago, a shoe called the Spira Stinger appeared with springs in the soles.

The manufacturers defended the concept saying: "It's just like the battle with oversized tennis racket or the metal driver. They were banned once, too. Now that's all you can see. Rules can never keep pace with technological change."

IAAF rules state that shoe technology cannot give an unfair advantage, and that footwear must be available to every competitor.

Last year, a runner told the Guardian "you feel (the Vaporfly) most when standing still or walking in them. They tip you forward slightly so it's like you are always just about to 'take off' at speed."

In a Times article, David Bates reckoned: "The carbon plate is not visible, but as soon as you run, it is bouncy, unavoidably so. Each step was easier than usual. It felt phenomenal, like cheating - almost. It felt as if, until then, I had been trying to run in sandals."

In evaluating the landslide of marathon records, The Economist concluded: "Regardless of whether the IAAF takes an official stance on Nike's latest creation, the advantage offered by the shoes complicates the task of evaluating the otherworldly feats of the last 13 months.

"The great barriers in athletics have long captured the public's imagination in part because so little technology stood between humankind and glory.

"Such triumphs of the body over the clock are no longer so clear."