Steve Hansen grew up wanting to be a jockey.

His father was into his race horses and Hansen would often get the chance to ride while being brought up on a farm on the Taieri Plain near Dunedin.

While his career ultimately went down a different path, first into the police force before joining the ranks of professional rugby coaching, what he learned in his youth proved to be an asset through his career.

"Working with [horses] and other animals on the farm, because they can't speak to you, you have to start watching the body language and the wee signals that they give off," Hansen explained.

"When people can't talk, or in the case of a horse that definitely can't talk to you, they do give you lots and lots of signals if you're prepared to be patient enough to look for them. You take that into your sport and look for the non-verbal cues you see from players and staff and even check yourself.

"What you're after is the body language and understanding there's plenty of messages given off and what you're being told verbally may not actually be the truth."

Being able to read body language was an asset and aided him in a successful coaching career that has seen him appointed a knight companion of the New Zealand Order of Merit for services to rugby in this year's New Year Honours.

For the 60-year-old former All Blacks coach, the job wasn't something he particularly thought he'd be good at, but was simply a way for him to give back to the game he loved to play.

"I just loved playing the game, I got a lot out of it as a player and I felt a duty to go back and give something back to it. Coaching, for me, was the obvious thing," he said. 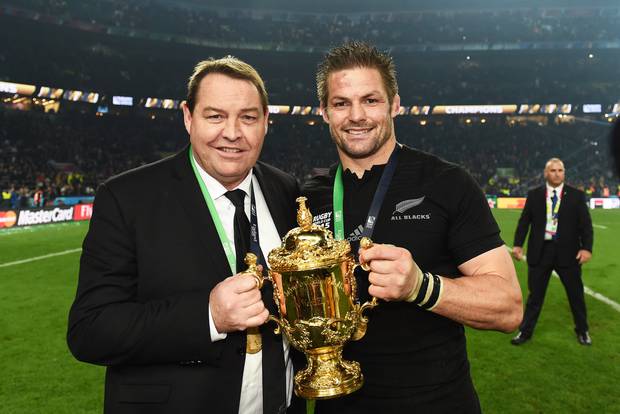 Steve Hansen led the All Blacks to World Cup triumph in 2015. Photo / Photosport

"Our family was very much a rugby family and my father was a very good coach in his own right and advanced in his thinking way before his time. He'd challenge us to think about the game, so coaching was something I fell naturally into.

"The thing I love about coaching today is still the thing I loved about it when I started: Looking at the players' faces and the joy you see when they do something they wanted to do but weren't quite nailing, and you play a small part in helping them do that; just being part of that is something I've enjoyed."

Hansen began his career with Canterbury in 1996, before joining the Crusaders Super Rugby franchise as an assistant in 1999. In 2002 he took over the reins of the Welsh national team, before returning to New Zealand to join Sir Graham Henry's coaching staff with the All Blacks.

Hansen worked as an assistant to Henry for eight years, and replaced him as head coach when Henry stood down from the role after the 2011 Rugby World Cup.

During his time as head coach of Wales and the All Blacks Hansen won 103 of 137 matches and led the All Blacks to victory at the 2015 Rugby World Cup – repeating the feat of four years earlier when he was an assistant coach with the team.

"It's been a wonderful, wonderful game and rugby certainly doesn't owe me anything – I owe rugby a way bigger service than it will ever owe me."