The latest addition to the All Blacks coaching team has admitted he checked if Ian Foster had the right number when he was called about the position.

Brad Mooar was confirmed as the final piece of All Blacks head coach Foster's team on Christmas Eve and will look after the side's offensive tactics.

However, Mooar told Wales Online Foster's proposal to be part of the All Blacks came as a bolt from the blue.

"I asked him if he had the right number! If you ever expect that then you are getting ahead of yourself," he stressed.

"I was humbled to be part of the conversation and to be in the position of having two magnificent opportunities was just humbling."

The other opportunity Mooar mentions is the slippery fact that he is currently the head coach of Welsh club Scarlets and some serious talks took place to make Foster's wish come true.

"You can't control the timing of the opportunities. As a Kiwi lad you want to play for the All Blacks. I was always available but never picked!

"It was a trying time to work through that and knowing which way you were going to go. You balance that with doing something you love here at the Scarlets."

The deal that the Scarlets and New Zealand Rugby eventually agreed to allows Mooar to complete the current season of rugby with the Welsh club, a clause that was crucial for the former Crusaders assistant coach. 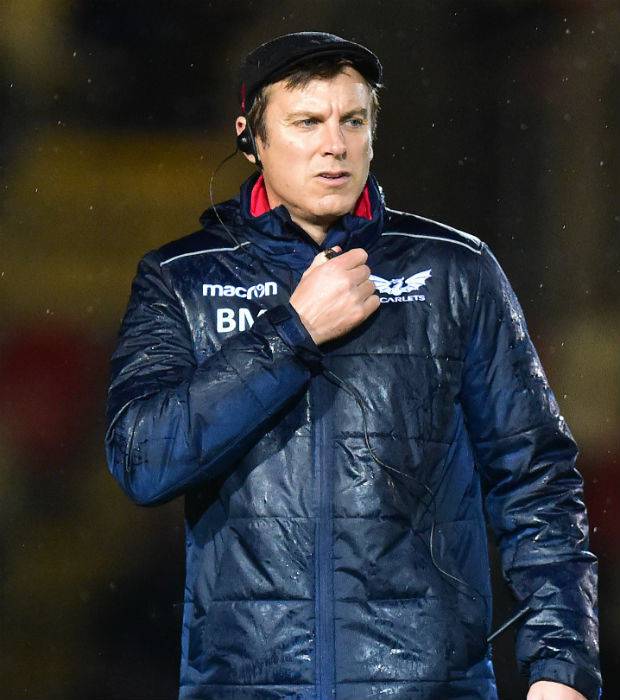 Brad Mooar in action for the Scarlets in Wales. Photo / Photosport

"It was always important to me, it was always going to be the end of the season and we get to finish what we started and leave the place in a position where it is ready to explode and go forward."

Mooar added that his relationship with Foster has always been a strong one, and it played a huge part in putting this deal together.

"We have collaborated for a long time and have a good relationship and exchange ideas regardless of who we are coaching.

"He was putting his team together and thought I can add to that. He rings up and says 'I know you are in a role that you are loving and we want to talk about another one'.

"We talked through that and things rolled from there. It is grown adults having adult conversations and however difficult they might be it is important to be honest and empathetic and maintain integrity."

That sense of integrity seems to be at the forefront of Mooar's mind as he prepares to hand over the keys to the Scarlets later in 2020.

"Once a Scarlet always a Scarlet and what is dear to my heart is what has been started here continues on and I am willing to be part of that conversation [with finding a successor]."

While full details of the agreement between NZ Rugby and the Scarlets are confidential, it includes the payment of some compensation for the Welsh club. There is also an intention to continue to foster links between the two organisations in the future.