Australia were looking for their first win in Johannesburg since 1963 and had a golden opportunity, with the Springboks fielding a weakened side on Saturday night.

Springboks livewire halfback Herschel Jantjies scored a try in each half in a memorable Test debut.

Wallabies coach Michael Cheika slammed a decision to yellow card prop Taniela Tupou for a late, no-arms tackle, with the Springboks scoring 14 points in his absence.

"I make it as the wrong call," Cheika said.

"The other guy (Springbok) should have been sent to the sin-bin for a shoulder charge.

"The fourth official (should have) focused on the green guy who came in with a shoulder charge and then Taniela came in after that to get him, with his arms wrapped at the right height.

"I'm not sure if big contact is a penalty these days but that's the wrong decision."

The Wallabies were in the hunt early but two blown tries in the first half proved crucial.

Australia trailed 14-10 at halftime after a try by backrower Lukhan Salakaia- Loto was denied after the last pass from Samu Kerevi was ruled forward by the Television Match Official. 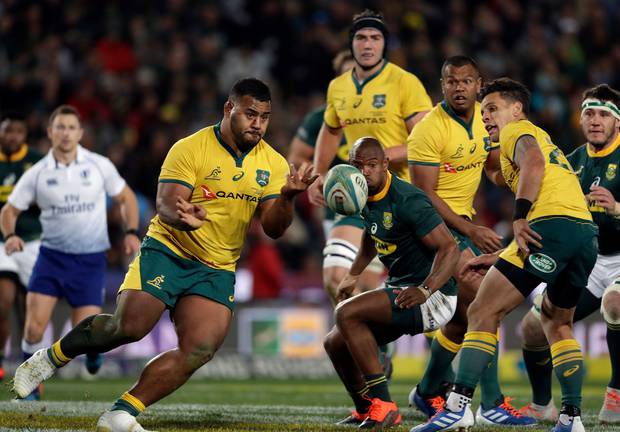 Winger Dane Haylett-Petty, who scored their opening try, could have added a second and given his team the lead but knocked the ball on as he dived on it over the line.

Skipper Michael Hooper left a further three points on the field when he turned down an easy penalty shot to chase a try just before the main break.

Their second half also didn't go to plan.

As well as the yellow card, they lost veteran prop James Slipper to a head knock nine minutes in, which gave rookie Harry Johnson-Holmes his first cap.

Although behind on the scoreboard, there was a lot to like about the Wallabies, particularly in the first half, with some excellent defence and creative attack that challenged the Springboks when they went wide. 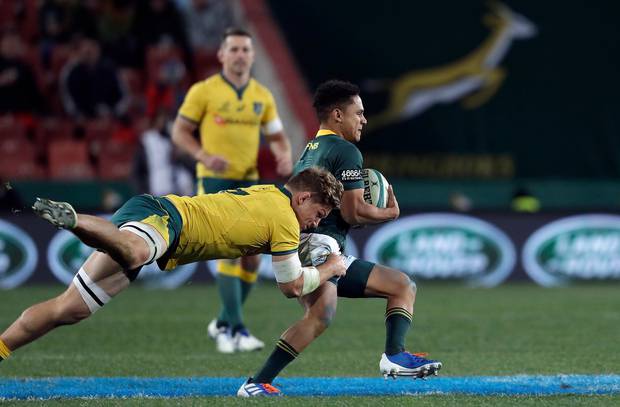 Cheika believes there's plenty to build on, and their ball in hand attack would continue to improve.

"I was happy with a lot of the things we had been working on," Cheika said.

"I know it was five tries (conceded), but our defence was good.

"But in that second half when we didn't have a lot of the ball, we were just a bit loose with it when we did have it and that gave the momentum back to the other team."

Cheika was pleased with the opportunities his team were able to create despite the Springboks' rush defence.

"We knew they would come with that hard defence, but we still made a significant number of line-breaks," he said.

"When teams rush on you like that, you are going to get slammed sometimes, it's the nature of the beast, but sometimes you can pick it apart and we did that.

"There is a commitment to playing that way, both in attack and in defence, and it will build as the season goes on."

Australia has less than a week to hone their game.