Djokovic is facing the prospect of a hefty fine for twice tapping Damien Dumusois on the foot while remonstrating with the French official during his drama-charged 6-4 4-6 2-6 6-3 6-4 win over Dominic Thiem.

The Serbian lost his cool when he was handed back-to-back time violations in one game for taking too long to serve.

With the score locked at 4-4 in the second set, the second penalty came at break point and cost him a first serve, with Djokovic losing the game.

Dumusois didn't react. But, according to the official grand slam rule book, Djokovic could find himself hit with a $US20,000 ($A30,000) fine, although penalties are discretionary.

The rules state: "Players shall not at any time physically abuse any official, opponent, spectator or other person within the precincts of the tournament site. Violation of this Section shall subject a player to a fine up to $US20,000 for each violation."

Former Aussie pro Rennae Stubbs was stunned. "Wowza!!!! I cannot believe Novak just patted the umpires foot!!!!!!!!!! I mean wowza !!! The rules are the rules, you have to get that serve off before 00. I mean there is leniency sometimes because of the point prior but wtf with touching the foot!???" 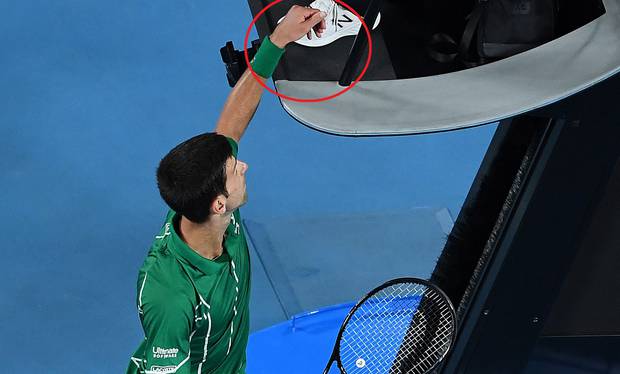 Novak Djokovic of Serbia taps the chair umpire Damien Dumusois on the foot as he walks past after being broken on serve in the second set. Photo / Getty

But Djokovic doesn't believe he overstepped the mark. "For touching his shoe? I mean, I didn't know that's completely forbidden," he said after capturing his eighth Open crown.

"I thought it was a nice, really friendly touch. I wasn't aggressive with him in terms of physical abuse.

"I just couldn't believe that I got the time violation. It kind of disturbed me. That's all there is to it.

"Verbally we did have some exchanges, but no insults because if I did insult him, I would get a warning.

"Right now that you tell me that, I want to thank him for not giving me a warning for touching him. That's all I can say."

Djokovic maintains the second violation wasn't necessary. "The first one, fine, no problem," he said.

"The second one, it's just not necessary under the circumstances for an experienced chair umpire.

"I thought probably he, in my opinion, could have reacted a little bit better in that situation.

"These kind of things in games switch the momentum of the match. It was a very important game.

"Obviously four-all, I broke his serve back, got myself back in the second set, then lost that game. He won the second set. That completely changed the momentum of the match."

Djokovic also took issue with the Rod Laver Arena crowd getting behind underdog Thiem, who had never won a grand slam.

Despite leading, Djokovic took aim at the fans during the first set when he felt his serves were interrupted by crowd. "Shut the f*** up," he was heard saying. 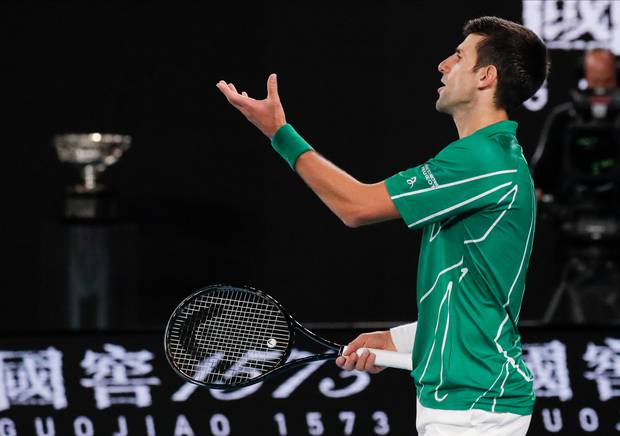 'I COULDN'T BELIEVE WHAT WAS HAPPENING'

A stressed-out Djokovic admits he "couldn't believe what was happening" after surviving a physical and psychological meltdown to win a mind-blowing eighth Australian Open crown.

A winner of the longest grand slam final in history, a near-six-hour epic against Rafael Nadal in 2012, Djokovic was unable to explain his ordeal on Sunday night.

"Tonight it was toe-to-toe battle. I was on brink of losing that match. I didn't feel great on the court at all," Djokovic said.

"It was quite surprising, to be honest, because I felt it started off well.

"But I played a couple of doubles, then the energy dropped an then the whole thing just started happening. I couldn't believe what was happening.

"Dominic started dominating from back of the court and won two sets pretty easily.

"I didn't have any injuries and it was very strange to me because I've done things pretty much the same as I always do.

"My energy completely collapsed. Every time I would toss the ball, I would feel dizzy.

"We were trying to do everything possible within the circumstances to kind of find a way to rejuvenate, I guess, and I was lucky." Looking resigned to defeat, the Serbian ironman somehow regrouped to claim an dramatic win in a minute shy of four hours to clinch a 17th grand slam title.

"I did talk to the doctor and she did assess an evaluate me an she told me that I have maybe few conditions and things like that," Djokovic said.

"But it's not much you can do but get energy gels and bars and lots of liquid and she told me I was dehydrated so I tried to drink as much as I can, I guess.

"There was definitely an emotional aspect to all of this. With all the experience that I have had, I'm still nervous, still stressed out about what's going to happen, how am I going to play.

"Then there was one point where I just said 'OK, I have to accept it. It is what it is. Let's try to do everything possible to come back.' And then I guess the fortune was on my side."