Serena Williams admits she is "super proud" to win her first title as a mother, after clinching the ASB Classic final on Sunday in Auckland.

During the ceremony after the 6-3 6-4 win over compatriot Jessica Pegula, Williams looked on with delight towards her coaches box, where her two year-old daughter Olympia sat with her husband Alexis Ohanian and mother Oracene Price.

Williiams had a staggering 72 titles to her name heading into this match, including 23 grand slam victories and five year end WTA championships, along with plenty of other big triumphs.

But since giving birth to Olympia in September 2017 Williams had been unable to add to that list, falling short in five finals in the last two years.

That finally changed in Sunday, in the modest surrounds of Stanley Street, which means this win will always be special for Williams, although the milestone took a while to sink in.

"I don't really care too much with men, if it's their first title as a 'daddy'. But it's different with men too, they didn't actually give birth, which is a totally different experience."

Williams admitted her recent record in finals – five defeats from five stretching back to the 2018 Wimbledon decider had been on her mind as she stepped out on court on Sunday evening.

It's pretty satisfying to get a win in a final. That was really important for me. And I want to build on it. Obviously it is a step towards the next goal in Melbourne." Despite her success in Auckland, Williams was non-committal when asked about returning to defend her title in 2021, for what would be her third appearance at the ASB Classic.

"I'll be taking it a day at a time," said Williams. "I had a really good time here. I think it is up to [tournament director] Karl [Budge] to kinda talk me into coming back."

After Williams' singles success, Williams and Wozniacki played in the doubles final later on Sunday night, falling to the American combination of Taylor Townsend and Asia Muhammed 6-4 6-4 in 71 minutes.

"Caroline and I would have preferred to have won the doubles but I am okay with what happened," said Williams. "I'm glad I was able to get a title in the singles, it's been a while I've been in the finals a lot so I just keep going and just keep trying."

But Williams had enjoyed the doubles experience immensely, as the scratch duo won their way to the final without dropping a set, with some of the most entertaining tennis of the week.

"I had a rough time the last time I was here in 2017 and I wanted to get some matches under my belt, so I felt like in case I ran into another hard time I wanted to play doubles." 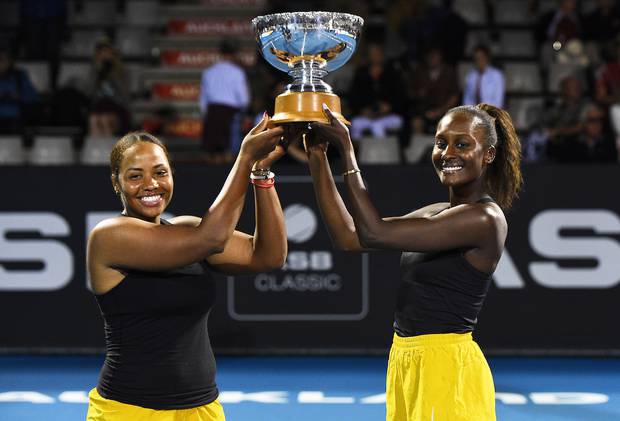 "I couldn't think of anyone I wanted to play doubles with more [than Caroline, and we talked about it months ago."

However, it seems unlikely the duo will team up with Melbourne.

"We haven't even talked about it," said Williams."It's hard to play so many matches.

After completing all her press commitments by 10:30pm, Williams then enjoyed a glass of champagne on centre court with her husband and some friends, and completed a celebratory cartwheel.